The Mentat system has been designed as a distributed modular system with an emphasis on its easy extendability and scalability. The core of the system reflects the architecture of MTA system Postfix. It consists of many simple modules/daemons, each of which responsible for performing a particular task. This approach enables smooth process-level parallelization and extendability. All modules use the same core framework built on top the PyZenKit framework, thus making implementing new modules an easy task.

Mentat itself does not have any network communication protocol for receiving events or messages from the outside (however nothing stops you from implementing your own module). Instead it relies on the services of Warden system, which is the security information sharing platform.

The diagram below provides an overview of the existing architecture of the Mentat system.

The implementation language is strictly Python3 with no attempts whatsoever to be compatible with aging Python2. The system uses the PostgreSQL database as persistent data storage. The system uses the IDEA as data model, which is based on JSON and which was specifically designed to describe and contain a wide range of different security events and with further extendability in mind.

The Mentat system consists of tools allowing processing events both in real time and retrospectively over a particular period of time. At present, the following most important modules for real time processing are available:

Little bit on the side is a big collection of utility and management scripts and tools that attempt to simplify repeated dull tasks for the system administrator. Some of the most useful ones are following:

The last important component of the system is a web user interface:

As mentioned above, all system modules, including continuously running deamons or periodically launched scripts, use a simple common framework called PyZenKit, which ensures all common features:

All continuously running deamons operate as *pipes*, i.e. the message enters on one side, the deamon performs relevant operations and the message reappears on the other side. To facilitate report exchange between individual deamons, alike in MTA Postfix, the message queues are implemented by means of simple files and directories on filesystem.

Internally the daemon modules use the event driven design. There is the infinite event loop and events are being emited from different parts of the application and then are ordered into event queue. Scheduler takes care of fetching next event to be handled and is reponsible for calling appropriate chained list of registered event handlers.

To further improve code reusability each of the daemon modules is composed of one or more *components*, which are the actual workers in this scenario, the enveloping daemon module serves mostly as a container. There are different components for different smaller tasks like fetching new message from filesystem queue, parsing the message into object, filtering the message according to given set of rules etc. These components can be chained together to achive desired final processing result. 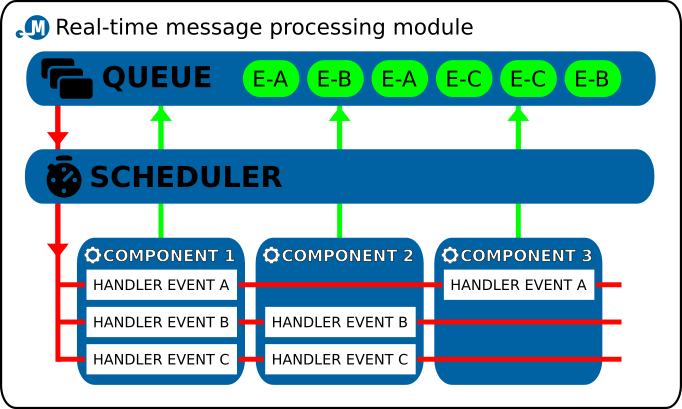 So, when implementing a new deamon, one only needs to design and implement the actual processing; everything else is provided for automatically, including the selection of a message from the queue and subsequent upload into the queue of another daemon in the processing chain.

To facilitate message exchange between daemon modules a very simple filesystem-based message exchange protocol (aka. *filer protocol*) was designed and implemented. It is inspired again by Postfix MTA.

The protocol uses designated filesystem directory with following substructure for exchanging the messages:

Key requirement for everything to work properly is the atomic move operation on filesystem level. This requirement is satisfied on Linux system in case the source and target directories in the move operation are on the same partition. Therefore never put queue subdirectories on different partitions and be cautious when enqueuing new messages. To be safe use following procedure to put new message into the queue:

Blue arrows are filesystem operations performed by the external process, that is placing new message into the queue. It is clear, that according to the procedure described above the message is first placed into the tmp and then atomically moved into incoming. Red arrows indicate filesystem operations performed by the daemon process itself. By atomically moving the message from incoming to pending it marks the message as *in progress* and may now begin the processing. When done, the message may be moved to the queue of another daemon module, moved to the errors in case of any problems or even deleted permanently (in case the daemon module is last in message processing chain).

The atomic move operation from incoming to pending serves also another purpose, which is locking. When multiple instances of the same daemon module work with the same queue the atomicity of the move operation makes sure that each message will be processed only once. All daemon modules are prepared for this eventuality and are not concerned when messages magically disappear from the queue.

The web interface for Mentat system is called Hawat and it is built on top of the great Flask microframework. However the *micro* in the name means, that to make things more manageable and easier a suite of custom tools had to be implemented to enable better interface component integration.

Flask already provides means for separating big applications into modules by the blueprint mechanism. This is used very extensively and almost everything in the web interface is a pluggable blueprint.